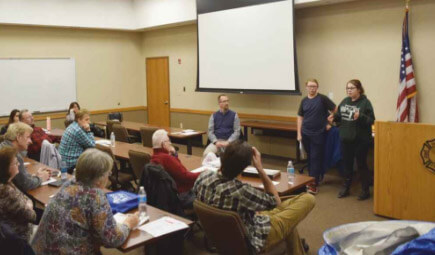 REED-CUSTER HIGH SCHOOL students Billy Barrow and Myrila Avitt explain to the members of the Braidwood Area Healthy Communities Coalition some of the lessons they learned at a special teen summit at Illinois State University this year, where the pair discussed strategies to deal with substance abuse and bullying with other teens from around the state.

Students at Reed-Custer High School are taking the initiative to fight bad influences.

RCHS students Billy Barrow and Myrila Avitt were two of hundreds of teens from around the state in attendance at a two-day CGTI summit at Illinois State University last month.

The pair attended with teens from Wilmington, to learn about the pressures teens face and how to combat them.

CGTI stands for Cebrin Goodman Teen Institute, which meets annually in July for a week-long event to fight off peer-pressure, substance abuse, bullying, and other issues that affects todays youth.

The two-day summit attended by Myrila and Billy was a way for teens to meet up for some quick interaction half way through the year, to see what is working, and what can be improved upon. CGTI collaborated with Operation Snowball to provide training, skill building workshops, and action planning time.

Myrila and Billy gave a presentation on Feb. 13 to the members of the Braidwood Area Healthy Communities Coalition, telling the members what the experience meant to them.

“It was basically about drug prevention, and we have a lot of classes and a lot of groups to go to. There were a lot of kids from around Illinois,” Myrila said.

The teens engaged in meetings to learn how they could aid the prevention efforts in their own community, and beyond.

“One of my classes was about stress, and what you can do instead of doing drugs,” Myrila said. “You can be social with your friends, you can do hand motions like Yoga to help your stress and mental state.”

Myrila added that she and her peers learned how to say no to peer pressure, and how drugs and alcohol affect the growing brain. They also learned the science behind “chasing that high.”

“One of the things that stuck out to me was a chart [that showed] what happens when you get high,” Myrila said. “The first time you get high, you’re where you want to be, it’s one of the best feelings in the world when you do it… But the next time you do it you don’t go quite as high, it’s not where you want to be anymore. And then you go down and you feel upset afterwards, then you do it again to see if you can get rid of that.

“The more you get high, the worse it gets, and the worse your reactions are,” Myrila continued.

The summit also covered strategies to deal with physical, verbal, and cyber bullying.

“The more you get bullied, the more you want to forget the pain and turn to bad drugs rather than people,” Myrila said.

“There was a quote we wrote down, ‘in the end we remember not the words of our enemies but the silence of our friends’ and that’s by Martin Luther King Jr.,” Billy said.

The paid are active members in RAD - Reed-Custer Against Drugs youth group - which started this year at the high school.

“We’re still growing,” said RCHS Principal Rim Ricketts. “Our goal by the end of the year is to get to 20 or more [students]. We are meeting monthly. These guys are also helping with the youth communication campaign that is going on at our school right now.”

Ricketts sad the high school and the coalition hoped to bring the ideas back to Braidwood, and build on them.

“We’re hoping that this really sparks some ideas, but we also hope to… get a few more kids this summer to go. This was just a two-day, that’s a week long.”

The BAHCC was able to send the pair to the conference through a donation from Warriors Against Substance Abuse (WASA).

CGTI is sponsored by the Illinois Association for Behavioral Health (IABH).

News courtesy of the Braidwood Journal

© Braidwood Coalition. All Rights Reserved. Website Designed and Developed by